AJR Keeps It Real And Keeps The Tunes Catchy Calling these guys a ‘boy band’ is a bit reductive, even a bit lame. In being a trio of brothers,  Hanson and Jonas Brothers comparisons keep cropping up and yet, Adam, Jack, and Ryan Met don’t allow people like you (or me) to define their path to success. Their recently released album, Living Room, was created in that very place in their apartment in Chelsea, and is an infectiously smart album that is almost as infectious as these three guys themselves. We caught up with them just before their release party at Webster Hall, where crowns of fans lined up to see them on one of the snowiest days of the year, to talk social media realness, brother stuff, and what they would be doing if they weren’t in one of the coolest up-and-coming bands out right now. 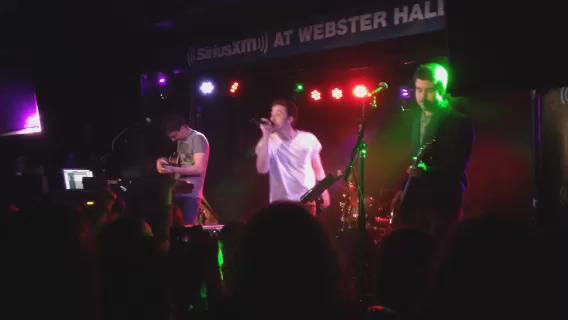 In terms of 2015, what do you guys have planned for the rest of the year?
We’re doing this cool tour thing coming up because the album is called Living Room. We ran a contest and the winners, we’re actually going into their living rooms throughout the east coast to play acoustic shows. And we’ll invite up to  60 people from that city, and we’ll do a couple in each city. We’ll go in and play an acoustic set and talk about the album and we want to make it like a super intimate living room style concert. So instead of doing like a traditional headlining tour we wanted to bring people into the space of how we created the album. So we’re going to be doing that over the next bunch of weeks. And watch out for our new single “Infinity”.
Is radio still crucial for artists like yourselves?
Absolutely crucial, it’s the number one driver of sales for pop artists. There are now a lot of other ways to get around it like pandora and social media but radio is still the number one.
In terms of radio breaking new people?
It does. And what’s interesting is radio works really city by city except for satellite radio. So you could be an enormous hit in Salt Lake City for example and nobody could have heard of you in New York City. So if you go out to Salt Lake City, you could be the biggest celebrity there ever and then you come back to New York and nobody knows who you are. It’s because every market plays songs differently. Let’s do an alternative universe theory. If each of you guys weren’t doing this what would you be doing?
Ryan: I’d probably be back in school back at Columbia. Taking off the past few years to do music. I’d probably be back there, probably doing film.
Jack: I’ve always had an interest in film but I guess advertising would be really interesting to me. I guess kind of like car commercials to give one example. I’ve always been really interested in creating car commercials. Creating a unique way to make someone buy a product, I’ve just found an interest in that.
Adam: I’d probably be back in school, or teaching.