June is going to be a big month for Angelina Jolie. What with starring as the most glamorous villainess of all time in Maleficent, and covering the June issue of Elle magazine, chances are we will be feeling some massive renewal of Angie love this summer. For those who have been Angelina Jolie fan-girls from the very beginning, you will be shocked to see just how grown up and sophisticated she looks in her Elle magazine photoshoot. We certainly are, and so we are going to backtrack to a bit of Jolie nostalgia from the time when she was a doe eyed bad bitch who knew how to accessorize with a pistol and shoot one too. Here are a few of our favorite badass Jolie moments from the past.

Tomb Raider
Classic Angelina Jolie as a modern warrior princess. Our favorite moment? Her response to being told that a lady should be modest. “Yes…. A LADY should be.” We think Lara Croft would be disappointed to see just how ladylike her actress alter ego has become!

Girl Interrupted
Being a sociopath never looked so sexy. Further proof that not even a mental asylum could take the wild child out of this babe.

Mr. & Mrs. Smith
Forever known has the birth of Brangelina, true Jolie fans will remember it as the moment when we realized that no one would ever look as good with a gun then Ms. Jolie.

Gia
One of the sexiest supermodels to exist played by the sexiest superstar in existence? Yes please! Even the tragic ending of this film can’t take away from Jolie’s phenomenal performance.

Hackers
A young Angelina Jolie plays a high school computer genius who is equally skilled with a keyboard as she is at hand to hand combat. 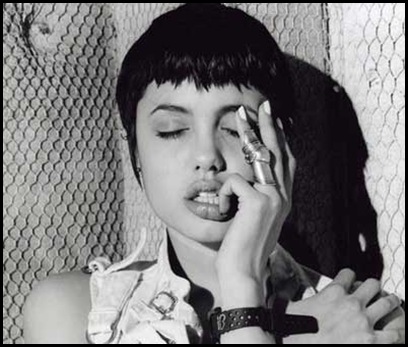 Gone in 60 Seconds
“I was always a sucker for a redhead”. And we are a sucker for Angelina Jolie behind the wheel of a red Ferrari.